Jacques Cousteau shaped my early love of the sea – I confess that fell in love with my husband not just because he had a fantastic sense of humour, but also because he chose to do Marine Biology at University and boy oh boy, I loved that he was studying something I could only dream about.

I was slightly duller – I got a job in marketing studied psychology and researched evolving audience behaviour and media consumption for a good while. Time passes and I wanted to draw upon on my work experience and knowledge to do something super worthwhile and for me it was the Marine Conservation Society (MCS). Kate Whitton Brown presented to me and a bunch of other volunteers on Teams during the height of Covid when I was just a MCS member, and I signed up to be a Sea Champion – I thought I could be valuable to them – I thought I could make a difference.

Next up, March 16, 2022, I went along to a seed bagging event in Southampton. Southampton Oceanographic Institute has a very large lab and together, probably the best part of hundred people were gathered carefully following precise instructions: Taking a hessian bag, filling with carefully measured amount of soil, adding a smidgen of blood fish and bone, and then carefully positioning the seagrass seeds on top – and fastening the bag using string. That morning 14,000 bags were completed and hosed down ready for their journey to Beaulieu River the next day. 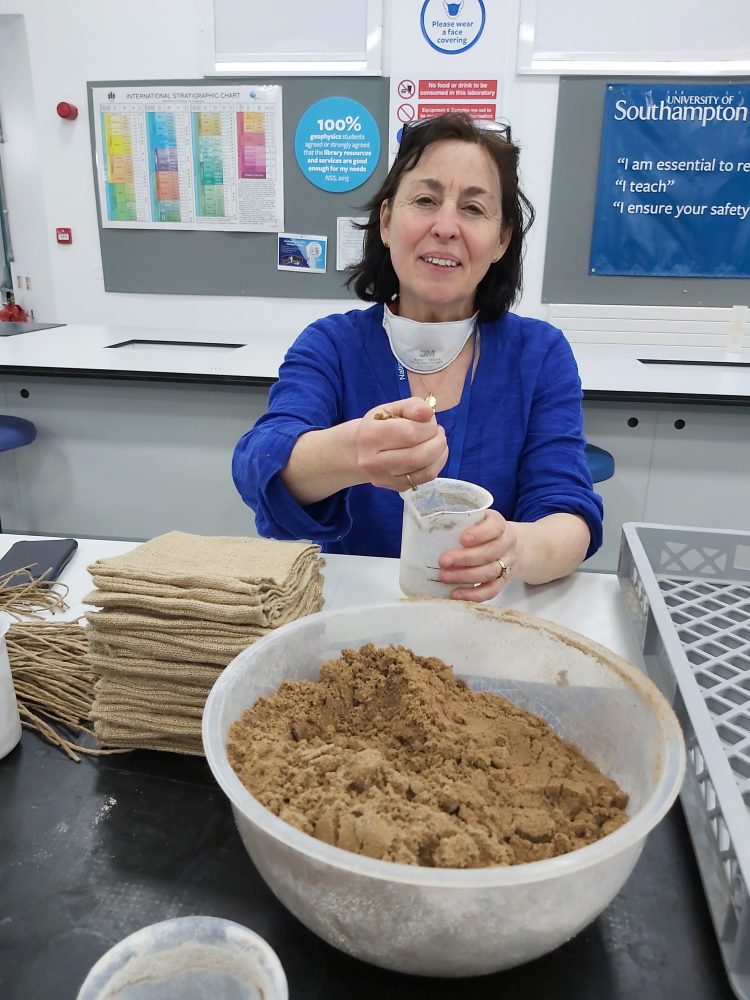 I was impressed hearing about the research that had gone into getting everything right – the source of the hessian for example, trying to ensure that was the most eco-material as well as most effective material in which to use to plant up a seagrass meadow. I headed back home to Lewes and thought wow – this is a brilliantly organised, smart, and future focused project – I want to be more involved in helping it succeed. Kate at MCS was a fantastic mentor, super patient, guiding me through the ReMEDIES project, the brief was very simple – raise awareness. So, I started shaping some slides Kate gave me, with the aim of doing a fab presentation that could be accessible to a broad-based audience. I hoped to roll it out into a sort of a road show – beginning with Lewes.

I asked my Facebook contacts if anyone had a space I could use for a MCS event and an old contact of mine said she could help. This person, Helen Edwards, showed me around her newly converted Georgian office building just off the Lewes High Street and generously offered to provide support in the use of her design and technical team. We organised a date and I started writing emails to about 100 people. I thought it would be good to craft an event that had a mix of audience that would be trusted communicators to others in Lewes. My list included teachers, artists, writers, academics, politicians, hoteliers, journalists, diversity champions, planners and lawyers and general good eggs. I invited a mix of environmental groups but also the Rotary and other organisations to ensure the audience represented different perspectives and different backgrounds.  The email invitation was drafted up with two sections: Firstly, to tell people about the talk and define the ReMedies project in terms of identification, conservation and restoration of Seagrass; Secondly to explain in brief what seagrass meadows are and the challenge it faces. Even if they didn’t come along – I had spread the word to 100 people in that email. I used an image by Fiona Crouch to promote the event on Eventbrite and sent pdfs that were clear and beautiful. I had a few A3 posters, about 12 A4 posters and 12 A5 posters printed and distributed these to shops in Lewes who had responded positively to an email asking if I could use their window. 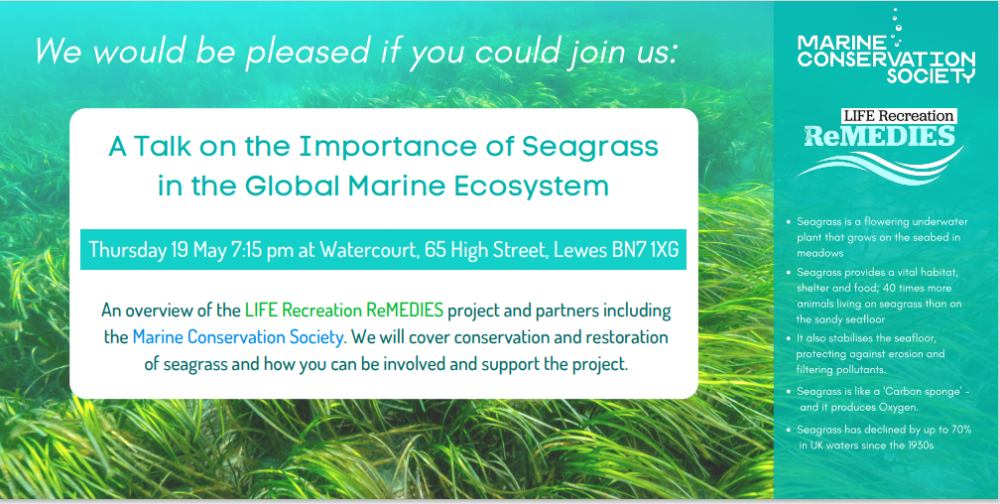 Sign up was slow at the start but the last few days we went from 50% to 100% of invites booked out. Of the 40 spaces – 38 attended in the end. We were pretty pleased to have 38 as everyone got a seat facing the podium and it wasn’t too cramped. As the event began we were warm and welcoming – I think it helped the atmosphere that there was a mix of some people I know vaguely, some friends and other complete strangers. I was able to meet most people and thanked them for coming along. I presented for the first half on seagrass and Kate completed the presentations with details on the ReMEDIES project. During the discussion session we began by asking people what their most profound learning was – and by the end some were saying blue carbon, net primary production. anchoring systems, seagrass conservation and restoration plans and even the difference between seagrass and seaweed.  Helen Edwards and her team provided everyone with refreshments including specially made seagrassy cup cakes complete with mermaid tails which was good fun and restorative after the talk of over an hour. People stayed and talked to Kate about the project. I later followed up sending every person (even some who hadn’t attended) a tailored email with a link the presentation, a link to other materials including save our seabed website.

In terms of outputs – we have probably got ourselves three more sea champions – mainly interested in passing info to schools – primary and secondary. We have hooked up with a secondary school in Lewes (1100) pupils and are working to incorporate seagrass into the science curriculum as well as presenting to assembly’s and groups within the school. We have artists who are going to be producing work on seagrass this year – including Adele Gibson who issued two paintings within a few days of attending and has 3600 followers. We are working with the River Festival in September to present to a community event on the importance of seagrass. We have positioned seagrass as a topic of debate within the chattering classes of Lewes. I continue to do more – with art and writing and generally supporting education initiatives. 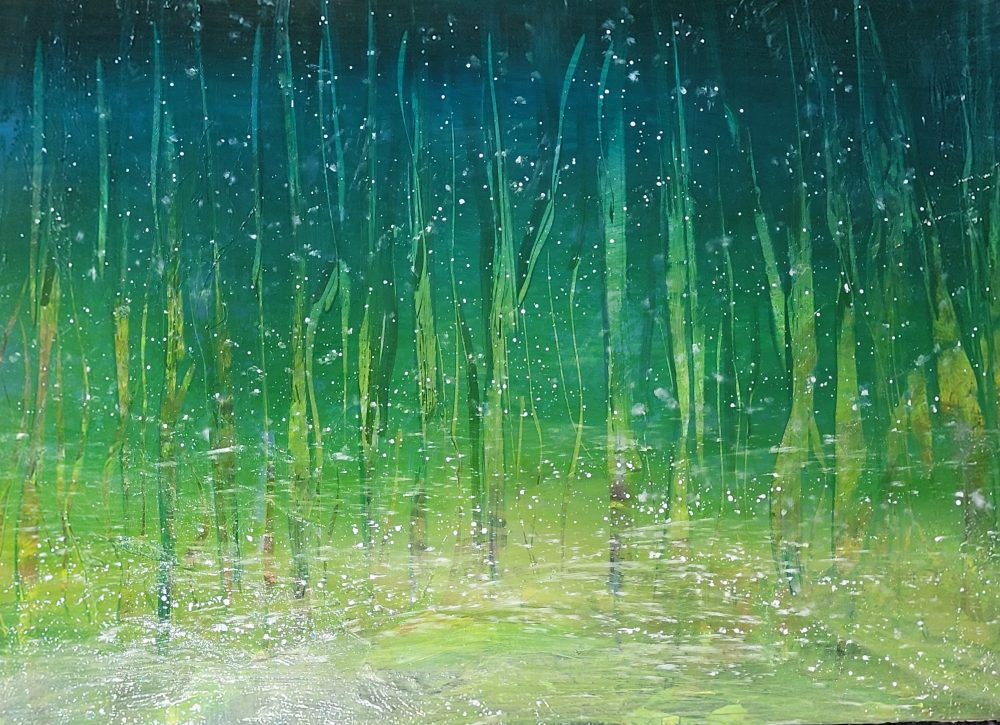 I have had a good experience and look forward to working more closely with the MCS on promoting the fantastic ReMEDIES project.