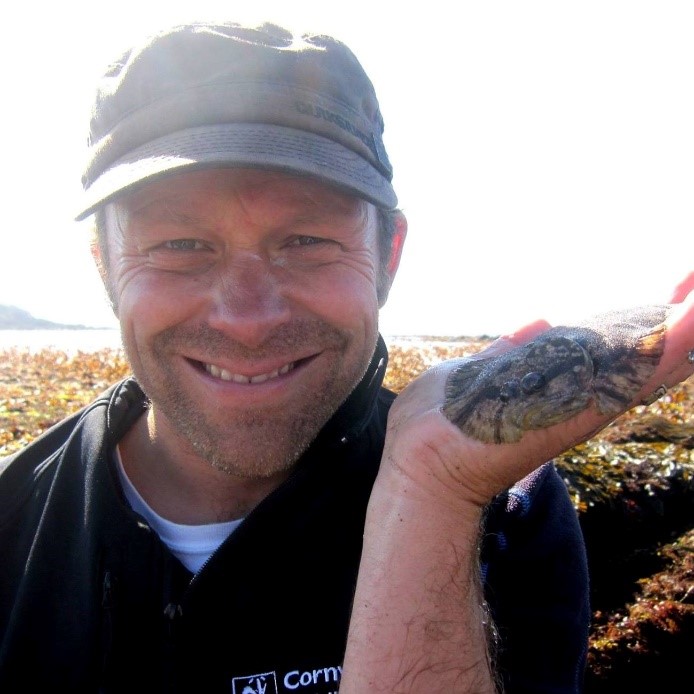 High summer diving in Cornwall doesn’t come much more iconic than a trip out of Porthkerris on the Lizard Peninsula, transferring your dive kit over the beach and up the gangplank onto the boat… 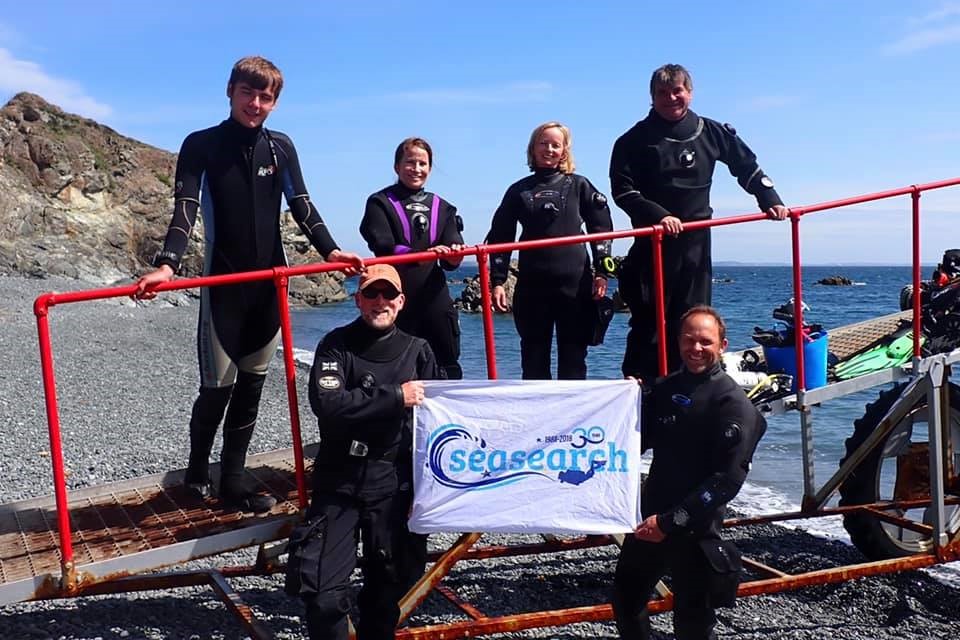 Our two-day trip was to survey the seagrass and maerl habitats in the Fal & Helford Special Area of Conservation (SAC). The team of volunteers checked out four shallow sites and made some exciting discoveries.

Guided by the 2015 condition assessment report of the southernmost seagrass bed in the SAC, in Porthallow Bay, a team of divers were deployed around the mussel farm in the bay to check out what was there. Whilst one buddy pair recorded seagrass just where it was expected, and indeed further inshore which may represent an extension of the bed, the others had a more varied experience finding coarse sediment and a small reef. Not finding seagrass isn’t a failure, it’s still really important to establish where it isn’t especially if it had been recorded there in the past. 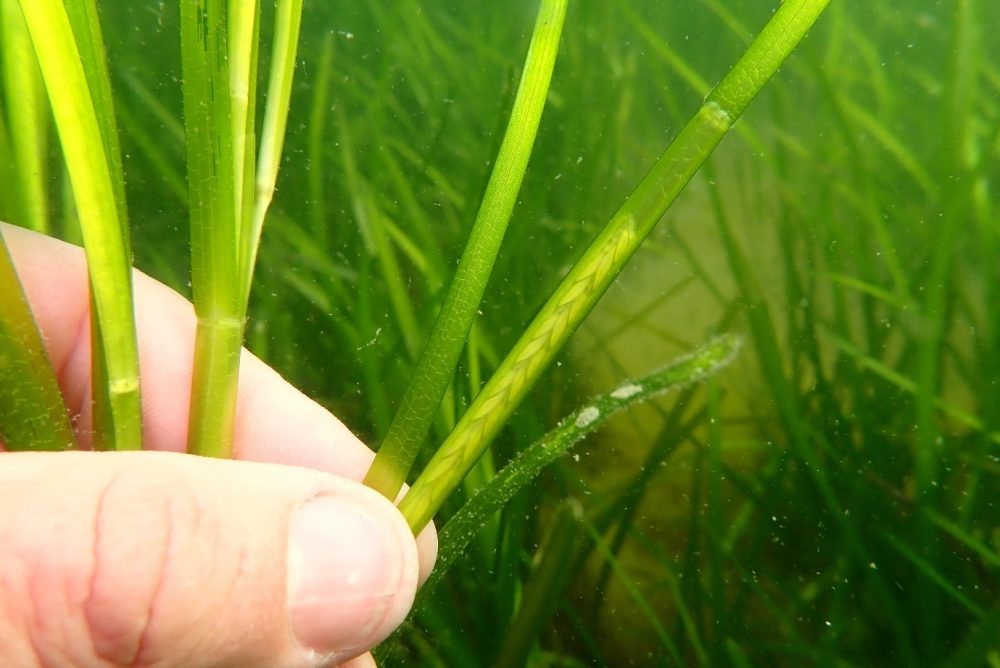 Slightly further north and Parbean Cove proved an interesting target. It’s a small shallow bay with some moorings with small boats on them (not deep enough for yachts and, as it is shallow, it’s presumably rarely visited by anchoring yachts). Whilst sheltered from the prevailing SW winds, it’s very exposed to a north-easterly blow. Again, in contradiction to the 2015 report, no seagrass was found in the vicinity of the moorings. But, on a positive note, no-one noticed any evidence of damage to the seabed caused by the relatively light chains on these moorings. Inshore of the moorings, in very shallow water (approx. 2.5m deep), a healthy seagrass bed with both seeds and flowers was surveyed.

On the north side of the Helford River, Grebe Beach has had a Voluntary No-Anchor Zone (VNAZ) in place for around ten years and it’s clearly working. The seagrass is very healthy and dense here, with fronds of 1m plus, at a depth of 6.5m. Outside the VNAZ to the south, the seabed is of fine sand with peacock worms (and no seagrass). In this area there are anchors being deployed and one was recorded being lifted from the seabed. (Fortunately, the divers weren’t impacted by this activity, but it does show that education is still required about the A-flag and divers in the water.) Whilst the anchoring doesn’t affect seagrass directly there is still an incredible diversity of life within the seabed which might be mostly out of sight but can still be damaged. 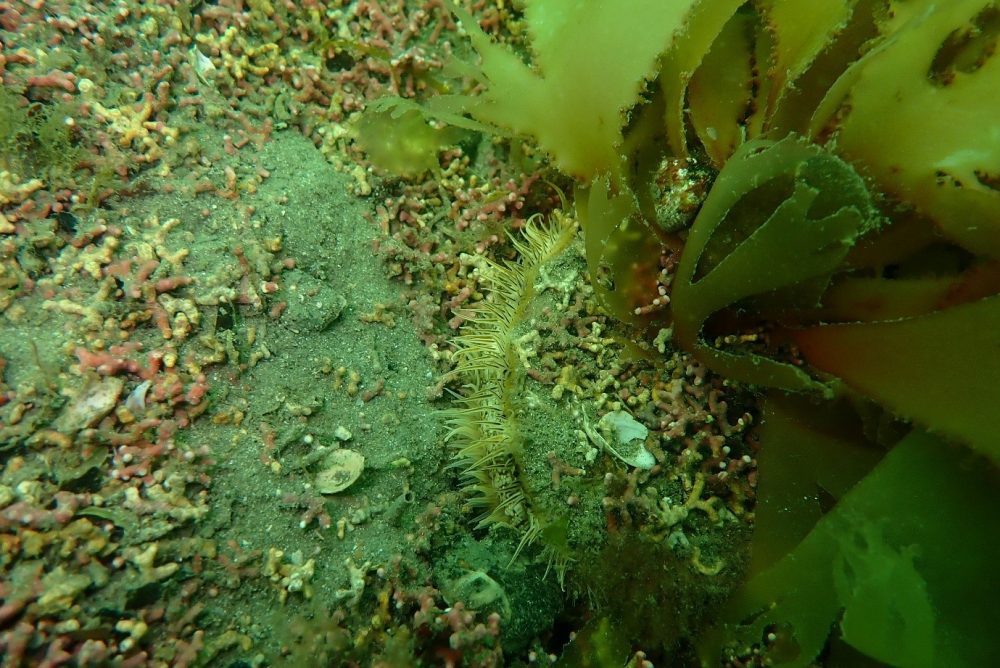 The opposite side of the Helford River east of Passage Cove had a double-whammy of both seagrass and maerl for the divers. It’s an area of strong current with a seagrass bed (dense coverage with flowers) in a narrow strip close to the shore and a strip of maerl bed (again, very healthy with 80-100% beautiful pink live maerl) in the central channel. Human impacts in this area were mixed, with one buddy pair not reporting anything, while another recorded evidence of boating and anchoring (and also huge scallops, Pecten maximus).

The volunteers were all stoked at the successes of the expedition, for which many grateful thanks must go to Porthkerris Dive Centre, skippers Mike Anselmi and Dave Brown, and the rest of the brilliant team.