Science is difficult and must be done by professionals. Or must it?

When Marine Conservation Society (MCS) was offered the chance to work with a volunteer yachtsman, Mr Chris Cooling, aboard his ocean-going yacht (Allegra), we grabbed the chance with both hands.

In marine conservation, budgets aren’t at the levels required to map every single metre of seabed or put divers or cameras into every nook and crannie of where our Marine Protected Areas should be effectively observed.

As such, we need help. That help often comes from ‘citizen science’. Think of the Big Garden Birdwatch conducted every January by the RSPB since the 1970s. Or the Basking Shark Watch and Jellyfish Watch programmes by the MCS where over 30 years of data has helped understand hotspots of these animals. Similarly, the magnificent ‘Seasearch’ project has been helping many statutory bodies develop proposals for protected areas for decades.

So, with the help of Chris, we have been able to collect important data around seagrass, which has aided the ReMEDIES partnership. Chris purchased a Remote Operated Video (ROV – a ‘Gladius mini’). He started using it at Osborne Bay on the northeast corner of the Isle of Wight in September 2020. Within three weeks Chris had taken more than 212 images at 22 ‘stations’ that recorded the density of seagrass habitat.

Chris was systematic in how he went about surveying the area, with all stations set 100m apart and, most critically, setting stations from nearshore (where it was assumed there’d be greater density of seagrass) to offshore (at some point where the seagrass would diminish).

Data from these extensive surveys has been analysed by a secondary school student (another citizen scientist). It shows that the density of seagrass produces a ’mature’ bed from near to shore up to 300m out to sea in the central part of the bay. Dive surveys by Natural England have also found a similar ‘zone’ of dense seagrass extending to the same point. 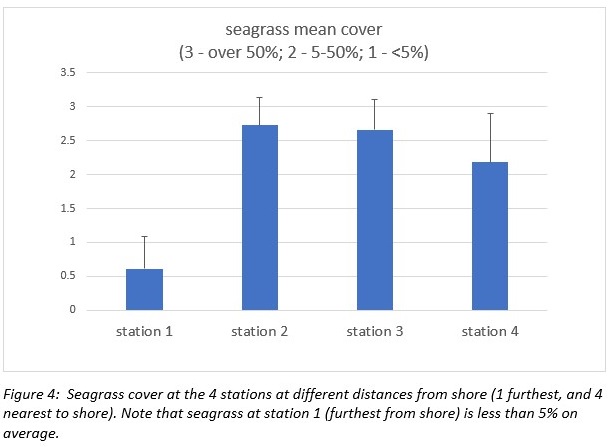 Chris’s work has enabled us to confirm a line (from northwest to southeast) where seagrass rapidly diminishes in density. It would appear from our visual surveys and looking at two historical Google Earth images from the bay, that introducing a ‘Voluntary No-Anchor Zone’ in this area could help to protect the seagrass whilst not affecting a large proportion of the vessels that use the bay as a safe anchorage, as many use waters over 300m from shore (from our observations), particularly in the central part of the bay.

We’ve also seen great work done in Falmouth by Chris and Allegra in early summer 2021, helping us look into where moorings and anchoring activity crosses over with seagrass beds. Chris has also recorded seagrass habitat under a new zone in Flushing that has seen moorings be removed in an area of dense seagrass.

Individuals such as Chris help conservation in other ways too. Chris is an experienced and thoughtful yachtsman who has always been seeking solutions for more environmentally friendly mooring and anchoring techniques. He’s had in-depth conversations with harbour masters, students and conservationists. People such as Chris, who are on the water 24/7, can do far more than some conservationists stuck on land. His efforts to help our cause – and that of other citizen scientists – are simply invaluable.